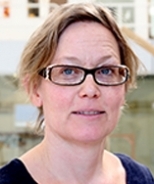 Ziggy Berglund
Sweden
About The Artist

Eva Ziggy Berglund, born 17 June 1962 , is a Swedish sculptor .She grew up in Stockholm . She studied at the Art school in Stockholm in 1983, the College of arts with a sculpture emphasis 1986-91 and at the school of art education in Stockholm in 1994., she performs portrait equally and fanciful shapes in various materials, such as concrete, plastic, bronze, iron and stone, but also in transient materials such as ice and snow. She has made ​​embellishments in swimming pools (eg Västertorp and Högdalens indoor swimming pool) and ornamentation reconstructions (eg Millesgården, Drottningholm Palace and Mälsåker castle ), on ice sculptures in Berzeli park (2001) and sculptures and drawings forSwedish television and John Bauer Troll in Junibackens foyer ( 2009). Ziggy Eva Berglund has also had exhibitions in Överammers Sculpture Park (2005) and on Enköpings riverside path (2007).

In 2012 came her surrealist pelarskulptur footprint on the ground in underground plane on station Hornsstullon Södermalm  in Stockholm. The sculpture consists of hundreds of specimens of everyday objects. The upper, light part consists of acrystal and the dark lower part is made ​​of cast iron . Most conspicuous are casts from people that happen, hundred mouths and noses. The artwork should reflect the life and history of Hornstullstrand.