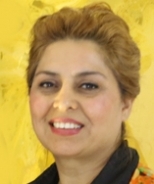 Farideh Zariv
Iran
About The Artist

Farideh was born in Tehran, Iran in 1963. She studied Bachelor of Arts at the Faculty of Fine Arts in Tehran and graduated with a degree in Graphic Design in 1984. In 1993, she graduated with another degree in Painting from Sureh University in Tehran. She has been a practicing artist for Twenty years and she has ten years of experience as a gallery director in Iran (Amin Art Galley) and Australia (Palangi Art Gallery). She has taken part in solo and group exhibitions around the world. In 1998 she received a special prize for her painting related to the Women During the War from Khoramshahr Museum in Iran. In 2000 she as involved with the world's longest painting organised by Medicine Sans Frontier in Dubai-Emirates.She exhibited in twelve countries in Europe, Asia, Africa and Australia.

She came to Australia in 2001 and she started to continue studying a master's degree in printmaking at the Australian National University in 2004. She was granted a funding by the Australian Government for her exhibition Hand of Fatima which was exhibited at the Canberra Museum and Art Gallery (2005) and later it was invited by Bo-Kaap, Iziko Museum in  Cape Town-South Africa (2006).