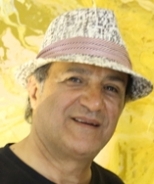 Nasser Palangi
Iran
About The Artist

Nasser Palangi graduated in visual arts from the Tehran University in 1984. While lecturing at different universities, he pursued his research in painting and art education in Tehran until1998.

At the beginning of the Iran-Iraq war (1980-1988), he spent three years working as a war artist close to the front line, creating series of drawings, paintings and photographs. In addition, he created a series of mural paintings entitled My Memory of the War for the congregational mosque of Khorramshahr, Iran, 1981.

Nasser’s works are exhibited in art galleries, public spaces, festivals, and is represented in Iranian and Australian public collections. He has been taken artist residencies in the USA, UAE, Australia and China, and has been the recipient of the local and international commissions, including an Arts ACT commission grant in 2005.

His photo media collage work has collected by the British Museum's Middle East collection and is published in ‘Word into the Art’ book.